Home Europe Player has ‘given his word’ to Manchester United – Willing to join...
SHARE

Raphael Varane to Manchester United got a big boost on Saturday when ABC (the second largest newspaper in Spain, and the top one in Madrid) reported the player has reached a pre-agreement with the Premier League club.

He was said to be annoyed that Real Madrid’s renewal offer to him is €7m and the club have refused to match the €12m a year they’ll be paying to David Alaba. There was some confusion over why Madrid would be offering wages as relatively low as €7m, but it needs to be noted that football wages in mainland Europe are often referred to in after-tax figures.

Sport take up the story on Sunday and they say Varane has ‘given his word’ to Manchester United, indicating that he’s willing to join the Red Devils during the current window.

That’s as long as they can agree a deal with Real Madrid.

According to Sport, Madrid’s asking price is €60m. There’s been some disagreement over the past week with figures from €50m to €70m used, although Manchester United being 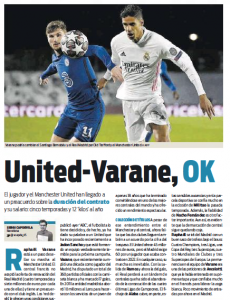 willing to pay €45m has been covered widely in Spain.

The newspaper say ‘his departure is inevitable’, which is a strong way of putting things.

Now on holiday after France’s Euro 2020 exit there’s every chance the player will consider things over the coming days, and probably wants his future resolved before he’s due back at training in a couple of weeks.