Otavio to Liverpool continues to roll on in the Portuguese media.

Towards the end of June there were repeat claims that the Reds could look to sign the Porto player for €40m before the end of that month. Otavio’s clause increased from €40m to €60m at the beginning of July, but there’s now suggestions a deal could be done for less.

A Bola explain that Porto desperately need to get a big chunk of money in, and their need is even greater after Wolves didn’t use their €20m buying clause for Vitinha, a deal that was expected to happen.

The Portuguese newspaper state Porto will sell ‘for a price they deem fair’, which is a great big hint that the €60m is simply window dressing and Jurgen Klopp’s side wouldn’t need to pay it.

According to A Bola, Liverpool haven’t given up and continue to be keen on the player. A Bola contacted his agent, Israel Oliveira, who said a move could happen “if it’s good for Porto and for Otavio”.

Oliveira added that all sides would need to be happy, and he insisted his client’s focus right now is Porto, making it clear he hasn’t been distracted. 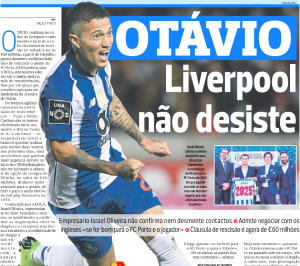 Born in Brazil, the attacking midfielder joined Porto’s system in 2014, working his way through their B team to the senior side.

In 150 Liga NOS games he’s scored 18 goals and contributed 44 assists. He can play in a variety of roles, so would likely be seen as a good squad option.