Fabio Paratici received some fame in Italy for signing free agents for Juventus and putting them on big contracts.

Whilst the signings were largely praised at the time, there’s since been some criticism of the salaries offered and there’s been hints the whole thing prompted his exit from the Turin club.

Tottenham were this week linked with Barcelona’s Miralem Pjanic, who Paratici will know well from their time together at Juve. Barcelona want rid, and whilst the player would prefer a return to Italy there’s been no serious efforts from Serie A clubs yet.

Sunday’s edition of AS states Tottenham have been in contact over the signing, and they reiterate the player’s Italy wish.

Over at Mundo Deportivo it’s reported Barcelona are willing to let Pjanic and Samuel Umtiti leave for free this summer, just so they don’t have to pay their wages any longer. 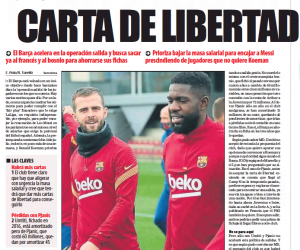 Umtiti isn’t keen and is quite happy where he is, whilst Pjanic is waiting for offers which may come his way as the window grows older.

That presents the chance for a Fabio Paratici special, a move without a transfer fee but big wages for Tottenham to commit to.