Barring an appearance in each of the FA Cup and EFL Cup, Simon Mignolet was forced to settle for a place on the bench at Liverpool last season.

The goalkeeper completed a switch to Club Brugge in the summer, where he is now featuring regularly for the Jupiler Pro League side and impressing. He left Anfield just days before the Premier League transfer window closed last month.

Prior to his exit from the Merseyside club, several clubs from the Premier League were believed to be interested in acquiring his services, such as Crystal Palace, AFC Bournemouth and Aston Villa.

Neither the Eagles, Eddie Howe’s side or Villa were successful in signing the 31-year-old. The former Sunderland man was also drawing attention from clubs in Portugal.

Mignolet sat down for an interview with Het Nieuwsblad and the Belgian mentioned about about interest from English clubs, while talking about his departure from Liverpool.

“Clubs valuate the cost of what they have to pay me, to Liverpool plus the resale value. For teams like Crystal Palace, Bournemouth or Aston Villa, that was too high… Same with Porto and Benfica. They were very concrete.”

When it was pointed out those clubs likely have bigger budgets than Club Brugge, Mignolet said: “Porto and Benfica reach the quarter-finals in the Champions League, but playing in Guimaraes or Madeira has no difference to Belgian league games.

“Then I would have to keep a four-hour flight away from home, where, apart from the Champions League matches, I completely disappear from the eyes of the Belgian public and the national coach. 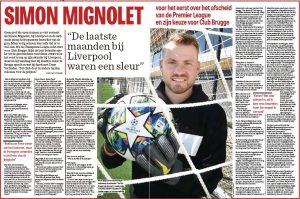 “Plus, Benfica’s offer was by no means better than that of Club. Here the coach called me, the chairman, Vincent Mannaert. Then the choice becomes easy. At Benfica it all went through. The best proof is that they didn’t take a goalkeeper in the end.”