Sergio Agüero has been one of the standout players for Manchester City ever since he swapped Atletico Madrid for the Etihad in 2011.

The Argentina international gets linked with a move away from the Premier League winners every summer transfer window, but it never seems concrete.

Wednesday’s edition of Mundo Deportivo claims the striker was on Barcelona’s radar in 2014.

Journalist Xavier Bosch further explains the 31-year-old was on their then technical secretary Andoni Zubizarreta’s list.

The South American would have been ‘delighted’ to make a switch to the Camp Nou as it would have provided him an opportunity to play alongside his friend and compatriot Lionel Messi.

During the negotiations for transfer, the Blaugrana asked the attacker to accomplish something difficult as he was still under contract with the English champions. 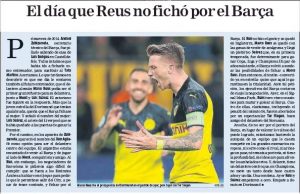 However, Agüero decided against making the gesture and ended up staying at Manchester City.

It hasn’t gone too badly since.