Home Premier League “Are you kidding me?” – Player reveals he’d never have believed his...
SHARE

Southampton signed Pierre-Emile Højbjerg from Bayern Munich in 2016 and contracted him to a five-year deal.

The midfielder has been a regular inclusion in the Saints’ starting lineup since the start of last season and is leading the team from the front after receiving the armband.

Ralph Hasenhüttl gave the 24-year-old the responsibility to be the leader at South Coast club, a potential quality that has repeatedly been pointed out throughout the player’s career.

Sport Bild have interviewed the Denmark international and asked his thoughts about being the youngest captain in the Premier League.

He said: “Incredibly good! If someone had said to me when I was a ten-year-old boy, ‘You’re going to become a Premier League captain,’ then I would’ve laughed aloud, thinking: ‘Are you kidding me?’

“Honestly, that’s the biggest recognition I’ve ever got in my career. It is a huge honour! Southampton has been etched deep into my heart.”

Claude Puel and Mauricio Pellegrino didn’t use Højbjerg as regularly in their starting lineups when they were at Southampton, but things changed after Mark Hughes replaced Pellegrino at the club.

However, it was Hasenhüttl’s arrival last December that has been vital in helping the player further enhance his overall game and also become a leader at Southampton.

“He [Hasenhüttl] told me clearly that I am always marching on the pitch, that I cannot take breaks, to set the pace and show my colleagues,” the Dane explained.

“You could say that he’s one of the best coaches of my career. I have incredible respect for him as a person and for his work.

“He has already taught me so much. My game has become more aggressive. I attack earlier, also tactically he helped me take a big step forward. And he often really provokes me.”

When Sport Bild questioned Højbjerg on how Hasenhüttl provokes him, he said: “He asks me at practice with a very serious face. 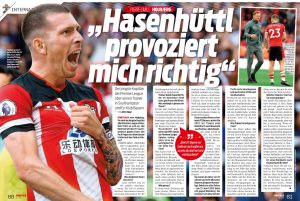 “I’m excited, I’ll try it until I get it right, and he’s standing there with a smile on his face. Then I know what he’s trying to do, and I really like his way to get me to the top of my game.”

Højbjerg’s contract with his current employers lasts until 2021, and a renewal is likely on the way.