After a few months of rumours, Paolo Hurtado has reportedly finally sorted his Reading exit.

According to Portuguese newspaper Record on Tuesday, the player is joining Vitória de Guimarães on a permanent deal, after spending the last year and a half on loan there.

The outlet claims the negotiations were ‘complicated’ because he still had an year left on his contract with Reading, but the clubs managed to find an agreement on Monday. It’s not mentioned how much Vitória are paying for the transfer, and Hurtado is signing a four-year deal. 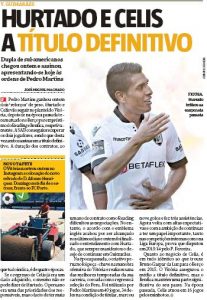 Signed by the Championship side from Paços de Ferreira in 2015, the 26-year-old only had the chance to make six appearances for Reading. He was sent on loan to Vitória Guimarães in January 2016, and ended up never leaving the club.

With 10 goals in 47 games, he’s much liked at the Portuguese side, who seem to have made an effort to finally have him on a permanent basis.