The club want to add in attacking positions, and it’s being made repeatedly clear that they need to sell several players before moving strongly in the market.

Given they’ve not got a lot of room for financial manoeuvre, some long term targets are falling away, and Sport reckon Barca are set to lose out on Fabian Ruiz to Manchester City or Real Madrid.

The Napoli midfielder is reportedly ‘close to’ both City and Madrid, and it’s even stated talks are already taking place with the player’s camp and the Italian club.

Given there’s an estimated transfer fee of around €100m, and Barca have other priorities, they’re not ready to put up much of a fight. 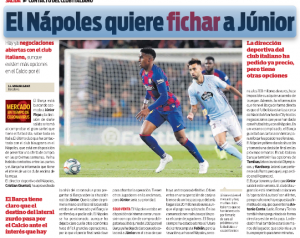 That would leave the route clearer for Manchester City, although it’s worth mentioning there’s an awful lot of hype around the Napoli player and a transfer fee in the region of €100m seems exaggerated to say the least.