Arsenal were keen on signing Dušan Vlahović before he joined Juventus from Fiorentina in the winter market.

Vlahović’s refusal to join the north London club forced them to look at other strikers in January and Real Sociedad’s Alexander Isak was subsequently linked.

A section of the Gunners’ support felt Mikel Arteta’s side ha ad chance to land the La Liga man in the mid-season window after he was spotted in the English capital.

Reports from Spain had then suggested that La Real felt ‘well protected’ to retain the 22-year-old due to his €90m release clause. It was also explained the Spanish club had not received any official approach for their player.

Despite Arsenal’s ‘clear interest in him’, Olabe said there was “no approach”. 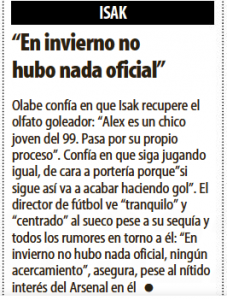 Olabe further explained that he sees the Swedish international as “calm” and “focused” on Real Sociedad, despite his recent dip in form and rumours of Arsenal interest.

Should Arteta be genuinely interested, he’ll surely hope Isak starts finding the back of the net regularly soon.