Dušan Vlahović snubbed Arsenal to join Juventus earlier this week and the situation has seen the north London club look at other strikers in the winter market.

Among them is Alexander Isak and the Real Sociedad player was spotted in London on Saturday, along with his club teammate, Adnan Januzaj.

The 22-year-old’s presence in the English capital got a section of Arsenal fans excited, with some even suggesting a move to the Emirates could be close.

Sunday’s edition of Mundo Deportivo states ‘tranquility reigns’, both at the La Liga side and from the player, regardless of the trip to London.

It’s claimed the Sweden international is on Mikel Arteta’s ‘agenda’ and is the ‘second or third option’ for the Gunners manager.

The report also looks at claims made in England that stated La Real have received a €70m offer from the Emirates club. 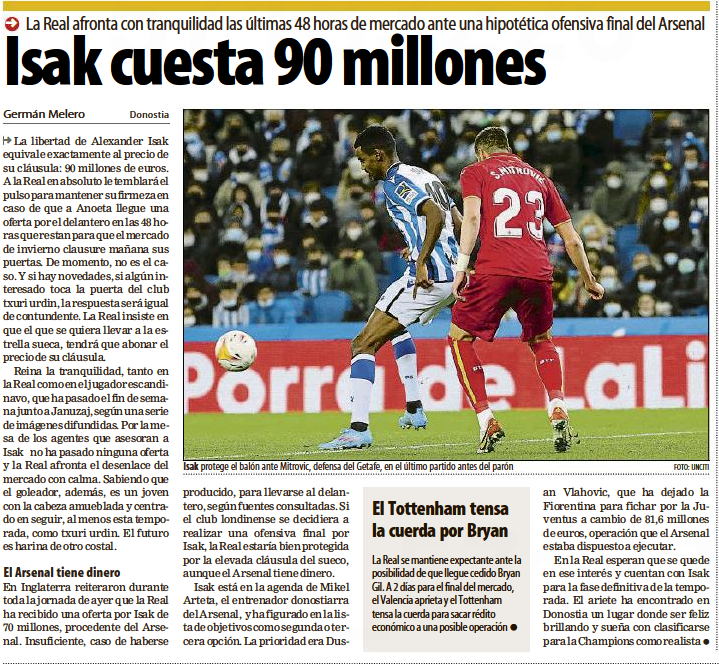 According to the sources consulted by the newspaper, La Real have not received any proposal from Arsenal. Even if they were to be receive one in that region, it will be turned down since it’s deemed ‘insufficient’.

The Spanish club are ‘well protected’ by the star’s €90m release clause. Mundo state that if any of Isak’s suitors knock on Real Sociedad’s door before the window closes on Monday, their response will be ‘forceful’, and they will refer to his high buyout clause.