Having sold Kieran Trippier to Newcastle United, Atlético Madrid wanted to bring in a new right-back to replace the England international in January. They finally took Daniel Wass, who can operate in various positions.

Prior to Wass’ arrival, the La Liga winners looked at Aston Villa’s Matty Cash in the winter market. That’s according to Marca, who state that Andrea Berta ‘tried to sign’ him.

The Spanish club’s sporting director was ‘met with refusal’ from Steven Gerrard’s side. They were not ready to let the 24-year-old, their first choice right-back, leave midway through the season.

Despite January’s disappointment, Berta has not forgotten about Cash. The player has been ‘closely followed’ by the Atlético chief for a ‘long time’ and is the Italian’s ‘preferred’ target.

Cash joined Villa from Nottingham Forest in 2020 and is currently in his second season in the top flight. Diego Simeone is not convinced of the Poland international because of his lack of experience of playing at the highest level. 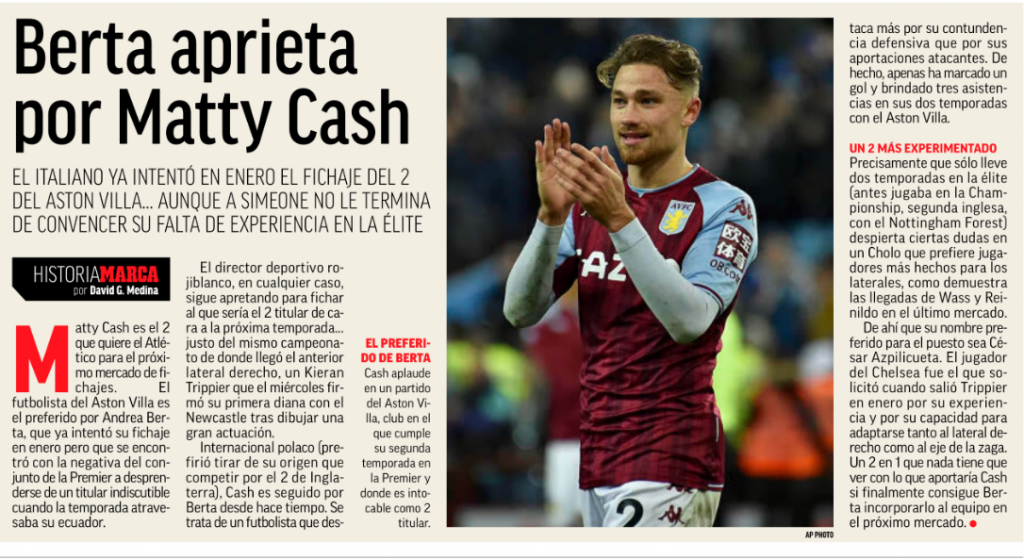 The Atlético manager prefers César Azpilicueta, who has less than six months left on his contract at Chelsea. The Blues captain can operate anywhere in the back four and his signing can give Simeone more options when picking his starting lineup.

Azpilicueta’s versatility and experience is something that Cash will not be able to match as of now.

Berta is the Villa player’s admirer, but he needs to convince Simeone first to carry out any potential operation in the next window.