Sometimes the potential value of a transfer can quickly be judged on reactions to it going through, and that looks to be the case with Samu Saiz to Leeds United. The Championship club confirmed the signing of Saiz on Monday after the process had been dragged out somewhat.

Spanish newspaper AS say that SD Huesca immediately signed Alex Gallar for €400k as Saiz’s replacement, and that’s their record signing, with the ‘just over €3m’ from Leeds United being the club’s record sale.

AS state Gallar will have three seasons to make Huesca forget Saiz, which shows the impact the now Leeds United player has had. Signing from Atletico Madrid in 2015, initially on loan, Saiz has made the locals love him.

Radio Huesca say that since signing, Saiz has been ‘shining as one of the benchmark players’ in Spain’s second tier. Saiz will leave a ‘great memory’ of his himself at Huesca 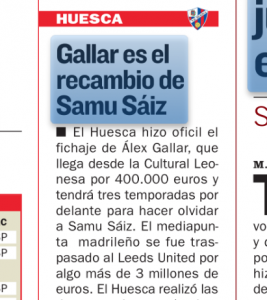 and ‘awoke the admiration’ of the club’s fans.

It’s all a stamp of approval for Leeds United sporting director Victor Orta. There’s no guarantee Saiz will settle at Leeds United and have a similar impact to what he did at Huesca, but then nothing is guaranteed in transfers. The reactions to the 26 year old’s exit suggest he’s got as good a chance as any.