Tuttosport reckon Juventus can get Anthony Martial relatively cheap, whilst still pleasing Manchester United, because the cost of the player will have amortised over the length of his deal.

Martial joined United in 2015 on a deal which initially lasts until June 2019 (with a further year option) and therefore Tuttosport believe his transfer fee will have been accounted for over each season.

With it getting to three years this summer, the Turin newspaper assume Manchester United will have seen the vast majority of the player’s cost go through their accounts, making it easier to show a profit.

The line of thought means it would be easier to please Ed Woodward, who it’s already been claimed is on good terms with Juventus, because of the accounting situation.

Moves have been made already, and Martial would be a ‘perfect’ signing for the Serie A champions.

But it’s surely not so simple. 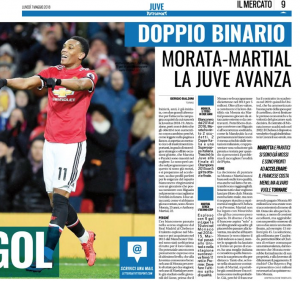 Firstly, Martial’s contract may end in June 2019, but that further year option really means it ends in 2020.

Secondly, even if Martial had joined Manchester United seven years ago, or come through the youth system, it doesn’t mean the club would be thrilled to sell him cheap.

Whilst how much of the fee has amortised will be accounted for at Old Trafford, it surely shouldn’t mean they’d be happier to sell for less.