Porto winger Yacine Brahimi makes it to the front page of Jornal de Notícias’ sports suplement Ataque today. And the story is obviously about the possibility of a transfer.

It’s reported that the player is the only starter who Porto are open to negotiate the sale of this summer, mostly because his contract expires next year and the club only own 50% of his rights.

Giving Brahimi a new deal to later get only half of a sale isn’t worth the investment, so that’s why the Dragons will listen to all the offers that come for the Algerian. He could be sold for less than the €60m release clause.

When speaking of interested clubs, Ataque claims that Brahimi has been linked to Roma. But according to people close to the player, he wants a move to England, ‘where he’s been recently pointed out as an Arsenal target’. 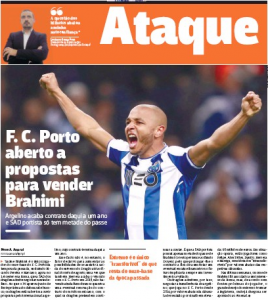 It’s common to see players from the Portuguese league keen on a transfer to the Premier League, and Brahimi has been linked to a few English sides other than Arsenal.

Now we wonder why didn’t they use their very own report to write this story. Maybe they really wanted to have Arsenal mentioned on Ataque’s front page. European giants are often used to get a player’s price up, and we wouldn’t be surprised to see it happening again this time.

Or maybe he really wants an Arsenal transfer.