This summer, Diogo Dalot, Ricardo Pereira and Willy Boly have all made permanent moves to Premier League clubs. That isn’t thought to be the end of it, and Jornal de Noticias report the €300m barrier is expected to be reached with the sale of another player.

Likeliest is Yacine Brahimi, with the Portuguese newspaper saying Everton, West Ham and Tottenham are following him ‘closely’.

It’s Everton and West Ham who have been most linked with the Algerian, and those claims go back some way. In fact, both clubs have gone through several managers since the Brahimi rumours started. 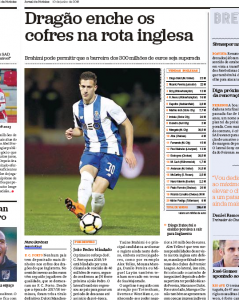 Either the interest is being overstated or the Hammers and Toffees see Brahimi as a club target, regardless of who the manager happens to be at the time.

Porto are said to want a minimum of €30m for the player, which would see them smash through the milestone, but there’s no claims of talks or offers just yet.