Star say the Turkish side are also monitoring Juventus defender Mattia Caldara but if they fail to land the Italian they’ll turn their full attention to Mari.

It’s claimed the Yellow Canaries will offer €1m for the Manchester City defender.

Fenerbahce have already lost Luis Neto this summer and with the Turkish giants looking to offload Martin Skrtel they may need to bolster their options in central defence. 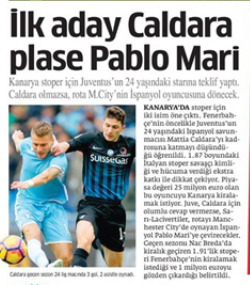 Skrtel’s high salary is an issue for Fenerbahce and Mari would be a cheaper option.

Mari spent last season on loan with Dutch side NAC Breda, where he made 34 appearances in all competitions.

The central defender has just a year left on his current Manchester City which could mean the Premier League champions will be happy cash in this summer.

Mari hasn’t played a game for Manchester City since signing in 2016.