This week, reports from the Italian media claimed a few clubs are interested in signing Arsenal fullback Cedric Soares, with Porto placing a bid to land him and Newcastle United making him a summer target.

Now as the Portuguese press comes up to respond to the rumours, they point out that the 30-year-old actually doesn’t have any offers to leave the Gunners at the end of the season.

Newspaper Correio da Manhã today writes that neither the player’s agents, nor Arsenal, have received any approaches for his transfer yet.

Someone close to the fullback told the outlet: “It’s speculation. There are no offers. Cedric has no interest in leaving Arsenal.” 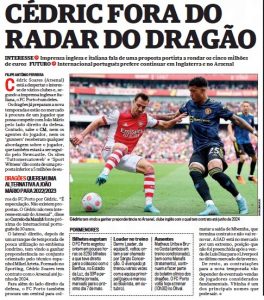 Cedric Soares’ wish of staying at Arsenal had already been reported by website Desporto ao Minuto on Thursday.

Their story also claimed that the fullback not only didn’t have any offers to move this summer, but doesn’t want to leave the Gunners either.

So with Cedric’s camp working fast to dismiss any claims about a transfer, it seems quite clear what his plans for the coming seasons are.