Napoli forward Hirving Lozano is looking increasingly likely to leave the club this summer and Everton have made a ‘request’ for him.

That’s according to Corriere dello Sport, who report that Lozano is moving closer to the exit door after just a year in Italy.

The Mexican joined Napoli in a club-record deal from PSV Eindhoven last summer but has endured a challenging first year, managing just three goals and two assists in 28 games.

His playing time has been severely reduced since Gennaro Gattuso replaced Carlo Ancelotti in charge, and that has not improved in the last few months.

In fact, Corriere explain that their relationship took another turn for the worst this week as Gattuso asked Lozano to leave a training session early as he had not found ‘the right spirit’.

This is something the Italian coach has done before, having done the same to midfielder Allan before a game against Cagliari earlier in the season.

That was a move that was thought to have pushed the Brazilian closer to the exit door, and it could be the same with Lozano, who’s future is ‘further and further’ away from Naples. 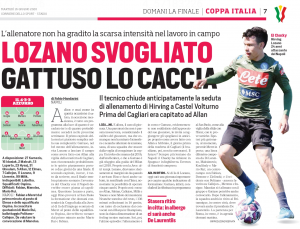 He has ‘requests’ in England and Spain, and one of them is from Everton, who are of course managed by Carlo Ancelotti.

He was the man who took him to Napoli last summer and a big advocate for the move, and is seemingly keen to reunite with him at Goodison Park.

That will not come as a shock to anyone given there have been rumours about a move for the last six months, never mind Everton’s desperate need for a right-winger.

That position has been identified as a problem one by director of football Marcel Brands and perhaps Lozano, who he brought to Europe with PSV Eindhoven, is the man they have identified as the solution.