Another day, another Hirving Lozano to Everton claim from Italy, but the way the situation is now being framed is interesting.

For a while, even up until last week, the Italian sport media were reporting Napoli’s keenness to part ways with the Mexican, and how Carlo Ancelotti’s side could do them a favour this summer.

It was thought that with Lozano failing to impress in Italy, that selling him this summer made sense. Napoli manager Gennaro Gattuso doesn’t seem to rate him, and keeping Lozano for the next campaign sees the very real possibility of his value dropping even further.

This isn’t a good stance for Napoli to negotiate from, so the club’s chairman Aurelio De Laurentiis is apparently trying to change things.

Sunday’s edition of Gazzetta dello Sport calls Lozano ‘top of the flops’, and states it was Ancelotti who wanted him, but then failed to get the best out of the player.

Everton’s interest is mentioned, yet it’s stated De Laurentiis won’t sell him off cheaply, after the player cost them €50m when all the transfer related costs are taken into account. 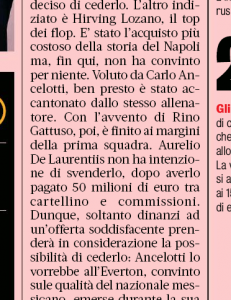 Frankly, that isn’t the Toffees’ problem, and De Laurentiis has tried this with Allan and Kalidou Koulibaly repeatedly. Nobody is going to pay inflated fees for players this summer, so Napoli either need to get real, or accept they’ll have to take the gamble of keeping Lozano for another season.