Emerging on Monday out of the blue, the idea that Divock Origi could go to Inter has started circulating around Europe.

While the English media put it as the Serie A side being interested in the Liverpool player, their Italian counterparts see it differently, pushing the line the Belgian forward was offered to them.

We covered the initial report yesterday, and Corriere dello Sport on Tuesday have an update on the situation.

As Inter look forward to the January transfer window, it’s explained the Origi situation ‘will be discussed’ today at the club

They state the former Lille starlet is ‘attracted’ by the idea of moving to the Italian side because he would ‘find’ Romelu Lukaku, his Belgium national teammate. 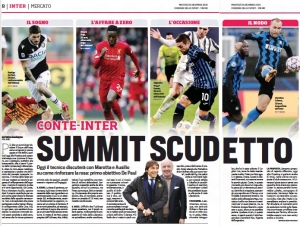 Inter will make ‘both technical and economic valuations’ regarding a possible move, especially since Liverpool are open to the idea of a loan.

We’ll have to wait and see about this, but considering Origi only has seven minutes of first-team Premier League football to his name this season, it’s fair to say his time at Anfield could be coming to an end as Jürgen Klopp turns elsewhere when it comes to his attacking options.