Divock Origi has managed just seven minutes of Premier League football so far this season, with the latest of those coming in Sunday’s 1-1 draw with West Brom.

The Champions League has seen a further 192 minutes, but that trend isn’t likely to continue now Liverpool face tougher opponents. This all presents a serious situation for the 25-year-old and if it continues then it’s likely he’ll miss out on Belgium’s squad for the postponed Euro 2020.

Given all of that, Origi has been the subject of repeat transfer rumours, and those continue in today’s edition of Corriere dello Sport. According to the Italian newspaper, agents have been offering Origi to clubs around Europe and that includes Inter Milan.

The Serie A club are looking to sign a striker in January and want a low-cost deal. It’s believed Liverpool would be open to the idea of a loan, which would suit Inter, however, Antonio Conte’s side wouldn’t be able to hand Origi regular minutes. 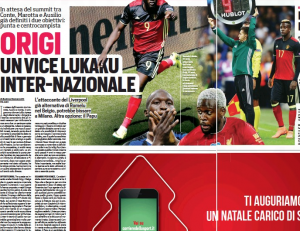 They’re looking for a back-up to Romelu Lukaku, and Corriere say Inter hope the good relationship between the two strikers, built during time together in Belgium squads, would help them.

Added to the potential of being in a Serie A title fight, it’s thought Inter have things they can tempt Origi with, although it really depends on what is most important to the Liverpool player.