Knocked out of the Champions League by Sevilla after a dismal home performance, Manchester United are going to have to spend yet more money in the summer if they want to avoid a repeat of this season, and defence will be a key area for José Mourinho to look at.

One of the names on his list, according to Corriere dello Sport, is Atlético Madrid’s José Gimenez, but before Mourinho can guarantee his transfer to Old Trafford, he’ll have to see off competition from Juventus.

The Italian side are also keen on the Uruguayan, and with a release clause set at €60m, it’ll come down to who can offer him more money and the better project going forward.

With the likes of Giorgio Chiellini, Mehdi Benatia, Andrea Barzagli and co. already in Turin, you would think Manchester United would have the upper hand, as seeing off competition from Chris Smalling or Phil Jones shouldn’t exactly be too difficult. 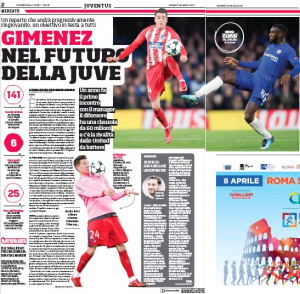 Corriere make it very clear that Mourinho ‘wants’ Gimenez at Manchester United, and has been following him for some time.

At 23 years of age, he would be a young player for the future, yet also one full of experience, having already represented his country at the 2014 World Cup and played in 22 Champions League games.

Perhaps the perfect mix for the Red Devils, who are sorely in need of strength in depth in that role.