Home Europe ‘His mood has not changed’ – Could be trouble ahead as Everton...
SHARE

Earlier this week we brought you the news that Paris Saint Germain were ready to make another attempt to sign Idrissa Gana Gueye this summer.

The Ligue 1 champions chased Gueye throughout the January transfer window but were unsuccessful in their attempts.

Thomas Tuchel remains keen on him, though, and is insisting that PSG move for the Senegalese midfielder once again. The problem is Everton are demanding a big fee, something Paris United described as ‘greedy’.

L’Equipe cover the story today and reiterate that PSG are interested once more. Tuchel still wants Gueye and it seems he’s convinced Sporting Director Leonardo to make a move for him as well. Leonard is described as ‘more than willing’ to get Gueye for his manager.

Talks have already begun with Everton, with a €30m bid already lodged.

That’s likely to be rejected as Everton wanted €40m in January but L’Equipe say the fact PSG are starting the bidding at that price, which was the most they were willing to pay in January, suggests there’s more of a ‘desire’ to get the deal done this time.

Then there’s Gueye. He’s currently at the African Cup of Nations and doesn’t want to think of anything else but he made it clear in January he wanted the move and ‘his mood has not changed’. 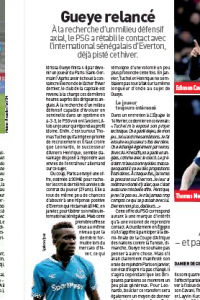 That suggests he’ll be pushing once again when he’s finished with international duty this month. Everton will likely be as resistant as they were in January though.

They have no need to sell or reduce their asking price. Gueye has three years left on his current contract so they’re in a good place. Until PSG pay what Everton want, this deal won’t even get started.