Fanatik today claim Aston Villa have tabled an offer with Turkish side Kasimpasa for their 24 year old winger Trezeguet.

Yesterday we covered claims from Turkey that the Premier League new boys are interested in Trezeguet and are ready to pay €10m to sign the player.

According to Fanatik, Aston Villa have made a bid in the region of €11m for Trezeguet but the Super Lig club’s owner Turgay Ciner values him at €15m.

The Egyptian winger reportedly wants to leave Kasimpasa in this transfer window and Fanatik say he’s told Ciner he wants to make his ‘dream’ come true by heading to the Premier League.

It’s claimed Ciner will allow Trezeguet to leave the Turkish club if Aston Villa offer something between €12m and €13m, even though he’s put a €15m price tag on him. 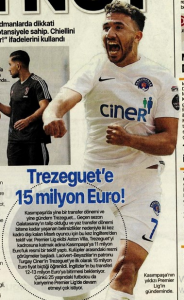 Trezeguet was linked with a move to England during the last summer transfer window but after a poor showing during the World Cup in Russia, clubs backed away.