Over the last one year, Everton have completed the signings of Yerry Mina, Lucas Digne and Andre Gomes from Barcelona.

The relationship between the two clubs has been good and on July 8th, RMC Sport explained this should help the Toffees in signing Malcom.

It was also explained the Merseyside club were set to make an offer in excess of €35m for the Brazilian.

Two days later, Mundo Deportivo explained the La Liga winners have not received an offer for the 22-year-old from Marco Silva’s side or any other club.

Friday’s edition of Mundo Deportivo claims Malcom will start preseason training with the Spanish champions as Ernesto Valverde’s side are waiting for the arrival of his agent, Luis Fernando Menez Garcia.

Both Malcom and his agent desire want the winger to continue with his current employer, but there are clubs who would be interested in signing him. 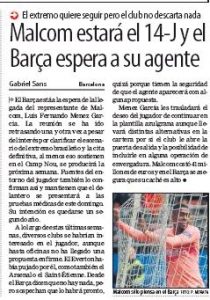 The interest from Everton is once again mentioned by Mundo.

It’s claimed that Barcelona suspect an offer for Malcom will come soon because there is a belief his agent will arrive with a proposal, ready for the meeting.

Manager reveals he is ‘not aware’ of Everton rumours – Suggestion...