Thursday was a big step forward in the Romelu Lukaku to Inter saga as the Serie A club travelled to London to hold talks with Manchester United about the Belgian.

No agreement was reached, because that would be far too simple and straightforward, but positive steps were taken towards a transfer potentially getting done down the line.

Gazzetta dello Sport try and provide as many details as possible about the whole thing, and there’s some good news and some bad news.

Because that’s the order they do it in, we’ll start with the smile-inducing parts (if you want to see Lukaku head to Italy).

Despite Manchester United standing their ground, at least for now, on the asking price of £75m, they did open the door for some negotiating by telling Inter they would be ready to accept a payment spread over two years. 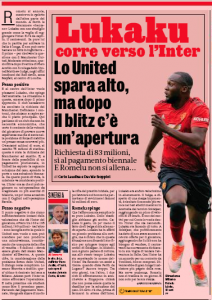 For the Serie A club, this is rather big news, as previous reports suggested the Red Devils would only accept a lump sum for the Belgian.

Manchester United are aware a chunk of the fee they will receive will go to Everton (around €5m), and that’s why they are standing their ground, wanting to recoup as much of their original expenditure as possible.

Gazzetta go on to explain the ‘dialogue remains complicated’.

With Piero Ausilio back in Italy, talks will now start with Beppe Marotta on how best to go about returning with an official offer, needing to increase the upfront payment for the loan considerably in order to, eventually, with bonuses, reach the infamous £75m.

There’s a long way to go here still, but this certainly was a step in the right direction for Inter.