The 23 year old midfielder has been repeatedly linked with Tottenham over the past week, and Celta’s local newspaper have their own slant on things.

It’s claimed Lobotka has been ‘interacting in a repeat way’ with Spurs over the past few days, but Le Voz then pick up English claims which state the player is second choice.

Tottenham haven’t made any actual attempt to sign him yet, but one Premier League club has. Le Voz state Southampton have submitted a €24m offer for the player, which was immediately knocked back by Celta. 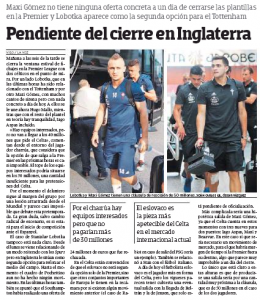 The Spanish club are convinced there’s genuine interest in Lobotka around Europe, with Italy being mentioned specifically.

They’ve already covered themselves for an eventual departure, but that doesn’t mean the Slovak is being pushed out of Galicia.

Now it’s down to Southampton to up their offer, or for Tottenham to actually make one.