According to a claim in the Italian media, Fulham are looking to sign Palermo defender Haitam Aleesami before tomorrow’s transfer deadline.

It’s been well documented Fulham want to strengthen in their fullback areas, and it seems the Norwegian left back is a possibility for the West London club.

Gazzetta dello Sport today report on Palermo’s transfer activity and they say Fulham are in talks with the Serie B side with regards to signing Aleesami.

It’s claimed the Premier League side have already offered €1.5m, but Palermo are looking for €3m. It’s expected negotiations will continue, with the possibility a deal could be done before the English transfer window closes.

Aleesami signed for Palermo in 2016 and has played over sixty league games for the Sicilian club. However, with Palermo failing to get promotion back to Serie A last season he could look to move on. 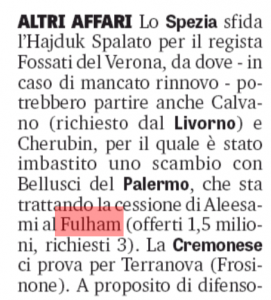 The 27 year old has been capped 16 times by his country.