Home Europe Middlesbrough ‘in talks’ with midfielder’s former club about return, ‘one step’ away...
SHARE

On Monday, we covered an exclusive on Atalanta fan site Bergamo Nerazzura regarding the possibility of Marten de Roon returning to his former club this summer.

‘Authoritative sources’ at the Italian side claimed they ‘liked’ the idea of the player returning, even if they admitted such a prospect was ‘difficult’.

At the time, while remaining skeptical, we explained that such fan sites had a knack of finding a bit of information here and there, and, if Gazzetta dello Sport’s Wednesday edition is to be believed, it appears Bergamo Nerazzura were right. 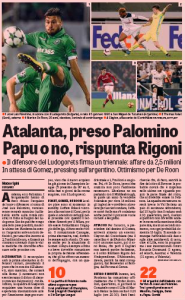 The Italian newspaper explain that Atalanta are currently in talks with Middlesbrough about the move, but the Championship side, who bought him for around €14m last summer, are asking for their money back for the transfer to take place.

Understandably, Atalanta are a bit reluctant to spend that much, especially now that Boro have gone down a tier, and there’s hope that de Roon’s desire to return to his former club could help push the price down a little bit.

So now we have a more ‘official’ source, if you will, reporting the news, with a price tag.

Let’s see what happens next.

Update: TuttoMercatoWeb on Wednesday go one step further, saying de Roon is ‘one step’ away from a return to Atalanta, with the valuation of the transfer being around €10m.

We’re not sure Middlesbrough will want to take a loss on the 26-year-old, but we’ll see.