Portuguese side Benfica have reportedly set a price to sell their duo Lisandro Lopez and Andreas Samaris, both linked with Newcastle United on Tuesday.

Whoever wants to take them will have to pay the Eagles €30m, according to O Jogo.

Newcastle seem the only club in town for either play. The word in Portugal is that things for the Greek midfielder are more advanced, while interest for the Argentine defender is still strong. 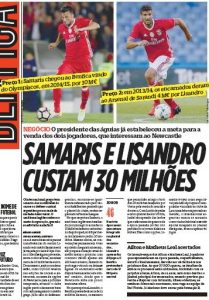 Benfica are demanding €20m for Samaris, and Newcastle only want to pay €15m. O Jogo says it’s not hard for the clubs to find an agreement, as long as they both bend a little.

For Lopez, the Eagles are asking for €10m, which would complete the €30m.

Newcastle are said to aware be of these prices, although there’s no update on the club’s reaction to it. That’s certainly a lot of money for two bench players, but still reasonable if you consider all the experience they’ve got, especially in the current market.

It’s likely that rather than Newcastle pressing for Lopez, Benfica have offered him to the club during Samaris negotiations.