They also paid for a bus to drive around the city with the same message on it.

De Jong had left the Dutch club by the front door, with the very best of wishes. Supporters had serenaded him outside the stadium, in moments he and his family won’t ever forget.

Next up, was Matthijs de Ligt. The defender would be leaving Ajax for around €70-75m and would get the same warm treatment.

Indeed, he was supposed to be joining his compatriot at Barcelona. There would have been a double unveiling, with De Ligt’s image joining De Long on the advert and on the bus.

Two Dutch boys living the dream and still loved by their former club.

With it being claimed he’d chosen the Turin club, the next assumed step was them paying the €70-75m and everyone living happily ever after.

However, there’s a rather big problem.

Juventus have only offered €50m, and there’s apparently a reason for that dating back to last summer.

Ajax believe €50m is ‘too low’, report De Telegraaf, whereas agent Mino Raiola believes it’s ‘completely according to the agreement’.

What agreement? Last summer when the defender agreed to stay in Amsterdam for a further season, it’s claimed a verbal agreement was made that he could leave this year for €45-50m. That was apparently witnessed by agent Barry Hulshoff and the player’s father Frank.

Nothing was put in writing, and now, given De Ligt’s value has risen hugely, Ajax want fair market price.

Raiola is quoted as saying: “Agreements have been made with Matthijs and it is up to Ajax how the club deals with this.”

The player’s camp are said to believe €50m is fair market value for a defender from the Eredivisie, and that De Jong (who they say actually cost Barca €86m) was overpriced: ‘Moreover, there is no bidding war for De Ligt, because he only wants to go to Juventus and only the Old Lady has made an offer in Amsterdam.’ 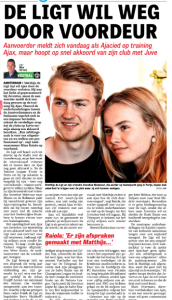 Raiola added: “And an arbitration case is out of the question for us. I also advised Matthijs this, because it does not fit with his style and lifestyle.”

If Mino Raiola had a client who had, in advance, verbally agreed a new contract at €100k a week, and then who had a great season and saw his value rise to a player who could be earning €200k a week, do you think he’d agree to the earlier amount or push for more?

Matthijs de Ligt won’t ruin his Ajax legacy this summer, but it’s possible he could taint it.