Marco Silva’s steps at Hull City have been closely followed by the Portuguese media since day one. There isn’t a single match result that is not reported by the local papers, as they all hope the manager can succeed in the Premier League.

Newspaper A Bola has once again sent a reporter to speak to the manager in England, and the introduction for their story couldn’t be better. They take bits from several British TV channels to show how much of a star Silva is in the country right now, as he works to save Hull City from relegation.

“I am happy for being able to open doors for others to follow the same path and I understand your curiosity,” said Silva when welcoming the A Bola reporter. “I see your presence here as a moral support. It’s a good sign that in Portugal they’re attentive to my job. 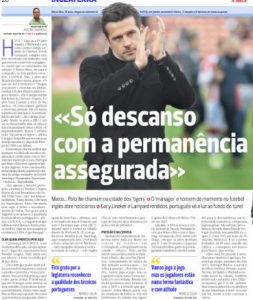 “I’m aware of the responsibility. But will only rest when we have the permanence guaranteed. I feel the support of my country.

“To be only the third Portuguese to train in the Premier League, after José Mourinho and André Villas Boas, brings me responsibility. I feel very good here, the recognition from everyone is great, I’m grateful for England to acknowledge the quality of Portuguese managers.”

On the fight against relegation, Silva claims the support from the Hull City fans has been vital in the campaign: “All the points are important, we go game by game, step by step. Up there, Chelsea and Tottenham also feel the pressure. This is different. But I’m comfortable. The players have been having a great attitude, the fans go everywhere and support to exhaustion, they are excited with the recovery, it’s natural.

“We have a great attitude, but Swansea don’t let us go, it will be a good fight until the end to see who’s saved and who goes down,” says the manager, who has gained 20 points in 14 Premier League games so far. “But we’ve been doing our job. I feel comfortable, at least while there’s this commitment from the players, the biggest part is their merit.”

Between now and the end of the Premier League season, Hull City will be facing Southampton, Sunderland, Crystal Palace and Tottenham Hotspur.