Dani Ceballos isn’t in Zinedine Zidane’s core plans for next season, much to the frustration and annoyance of many in the Spanish sport media.

Having impressed for Spain as they won the U21 European Championship, the midfielder has made it clear he wants a team next season where he can get games.

It was explained Jurgen Klopp wants the player, however, Liverpool want a permanent signing and don’t want to give Real Madrid a buyback clause. As it stands, this doesn’t suit either the player or his current club, with both feeling they have a future together, perhaps once Zidane goes.

Marca haven’t forgotten the story quickly, and there’s a big splash in their Thursday edition. It’s thought Liverpool are pushing for the player, and it’s explained he could be the club’s next Xabi Alonso. 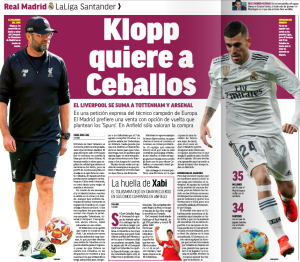 That’s not in terms of style, more that both are Spaniards and Ceballos could add some class to the Liverpool midfield.

Should the Reds be able to convince the player then they may find Real Madrid, who could do with some transfer money incoming, easier.