Earlier today, we covered the front page news from Record saying Wolverhampton Wanderers could be spending €60m on the signing of Benfica star Carlos Vinícius.

Manchester United fans who’ve read that story may be thinking why aren’t the Red Devils moving quicker, since they’ve been linked to the striker in the past week.

And Record actually brings a reason for it, leaving a part of their article just to talk about the interest from the Old Trafford side.

The newspaper says Carlos Vinícius is actually Manchester United’s second option for the centre-forward position. He’s seen as the cheaper alternative, as the he Red Devils’ priority would be to sign Wolves striker Raul Jimenez. 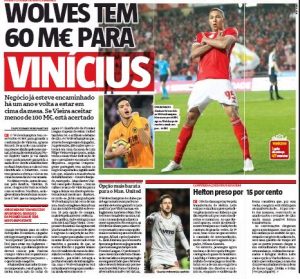 It’s said the problem is that Jimenez doesn’t have a release clause at Wolves, and the English press has been claiming that he should be sold for over €100m.

Since Carlos Vinícius has a release clause of €100m and Benfica have been demanding €60m for his sale, he’s become the most reasonable alternative.

It’s Jorge Mendes who’s been working on Raul Jimenez’s departure from Wolves and Carlos Vinícius’ move to the replace him, so he’s definitely the key man for Manchester United to contact regarding the two possible transfers.