Benfica may lose Joao Felix this summer, with interest in the youngster growing over the past few months.

What they don’t want to do is lose both Felix and Ruben Dias, and they especially don’t want to see the latter go for less than they think he’s worth.

That’s why they’re hoping the defender will sign a new contract, report Record, and in doing so have his release clause increased from €60m to €120m, the same as Felix.

But it’s not easy, with ‘sharks’ circling to sign the player. One of those is named as Manchester United, and there have been links with Old Trafford for some time.

Ole Gunnar Solskjaer’s side are joined by Juventus and Atletico Madrid. All three have been considering the signing having seen the 22 year old progress with Benfica and through to the national team. 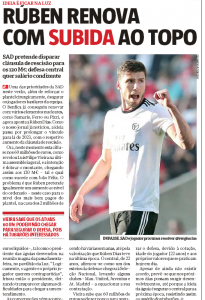 Manchester United scout almost every Benfica match and have done for some time, so they’ll know all about the young central defender.

Dias is expected to start tonight for Portugal as they face the Netherlands in the Nations League final.