Joao Felix is splashed across the front page of Sunday’s Record.

That’s not unusual, the Benfica player has been receiving a lot of attention given his breakthrough season. Now widely considered one of the best talents in football, a summer transfer is a possibility.

The Portuguese newspaper say Benfica president Luís Filipe Vieira on Friday asked shareholders how can they negotiate with “someone who has a 6 million euro proposal”.

That player is said to be Felix, and the ‘dream contract’, with a total of €30m for five years, is on offer from Manchester City.

Pep Guardiola’s side are prepared to meet the youngster’s €120m buyout, but not all in one go. They’d want to pay a flat fee with the rest based on performance bonuses. 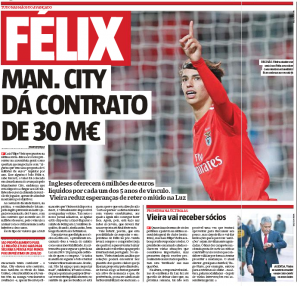 United, Juve and Madrid interest is touched upon and it’s made clear Benfica would find it ‘impossible’ to compete in terms of a new contract.

Vieira is said to believe the only way to keep the player is to sell him now and have him loaned back for a year.