During the last summer transfer window, Leicester City were repeatedly linked with a move for Real Sociedad’s Adnan Januzaj.

It was claimed in Belgium that the Foxes ‘dream of Januzaj’ and had ‘already made a bid’.

Then it went quiet, with the former Manchester United player remaining at Real Sociedad for the full season. He had a campaign hit by injuries and his form was subsequently up and down.

The Spanish club rate his talent, but there’s been rumours about a potential move this summer. Some of the claims state it’s the player considering his future, and others suggest the Basque club aren’t against a sale at a reasonable fee.

Sunday’s edition of AS claims Real Sociedad don’t want to part ways in the current market, but Januzaj himself may ask to be sold. 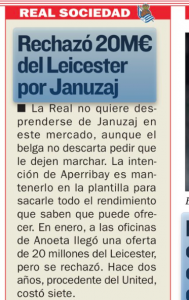 When it comes to naming interested clubs, all AS say is Leicester City made a €20m offer in January which was rejected.

If that’s true it’s clear they carried their interest on.

Brendan Rodgers could be just the right kind of coach to get the most out of the 24 year old, who looked seriously impressive when breaking through at Old Trafford.