One of the rumours gearing up to be among the biggest transfer stories of the summer is the interest of Manchester United in Victor Osimhen.

The Red Devils are said to be big fans of the Nigeria international, and there’s been talk of an informal offer already being made.

That hasn’t led to anything yet, probably because Aurelio De Laurentiis will be wanting to see if he can get the price to rise as much as possible, with Arsenal and the likes alongside Manchester United.

Corriere dello Sport have an article on the situation on Thursday, describing Osimhen as the ‘€110m man’, whom the Old Trafford side ‘have been seriously following for some time’.

It’s made clear the ‘initial price’ is the one above, which has been ‘communicated’ to all interested parties. 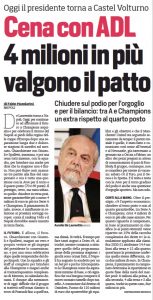 Whether they formally act on it remains to be seen, but Wednesday’s claims were the Manchester United were likely to come forward with something serious, with a proposal worth at least €100m reportedly on its way.

With just a few games left in the season, that could be right around the corner, as the Red Devils gear up for their new era under Erik ten Hag, who is expected to ring quite a few changes at Old Trafford once he arrives.