The 18-year-old is the subject of big news in local newspapers this week, as he’s been called up to represent the national team for the first time.

Now when writing about the raise in the player’s value, newspaper O Jogo points out he’s being followed by a long list of clubs.

Besides Manchester United, the teenager is also said to be wanted by the likes of Manchester City, Inter Milan and Real Madrid.

Newspaper Correio da Manhã is another one with a story on the teenager, and they claim that despite his release clause of €70m, Sporting could actually negotiate his sale for €40m. 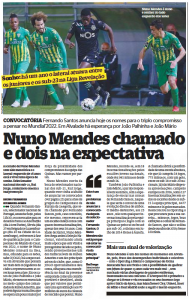 Manchester United have been linked to Nuno Mendes since last year, and what most fans should be wondering now is why would the Red Devils pay that much for another left-back now.

With Luke Shaw having a great season, former Porto player Alex Telles, who was signed last summer, ended up becoming a luxury back-up option in Ole Gunnar Solskjaer’s squad. That should be more than enough for the position.

Nuno Mendes is still 18 and Manchester United could, of course, be watching him for a future move. But right now, it would really seem like bad timing to go after him.