Juventus are fifth in the table with 72 points, trailing fourth placed Napoli by a point and three points behind Atalanta and AC Milan, who are in second and third spot respectively.

Failure to qualify for the Champions League means the Turin club would struggle to retain Cristiano Ronaldo, who earns a net salary of €30m per season.

A fortnight ago, Gazzetta dello Sport explained the forward is ‘willing to sacrifice’ his wages to seal a return to Manchester United.

Jorge Mendes, the agent of the Portugal international, has been looking in the market ever since FC Porto eliminated Juve from the Champions League. As of now, the super-agent has ‘no particularly interesting offers in hand.’

That’s according to Tuttosport, who say a handful of clubs can undertake an operation to sign the 36-year-old, and the list is further reduced after the likes of Real Madrid, Paris Saint-Germain and Manchester City ruled themselves out.

However, the situation with the Red Devils need to be clarified. The newspaper states Ole Gunnar Solskjaer’s side have shown interest and they could even bare the cost of the operation [transfer fee + player’s salary].

Another option would be for the player to return to Sporting and this was discussed by Ronaldo’s mother a few days ago.

The operation would obviously be difficult for financial reasons, but it can be carried out if ‘there would be an act of generosity’ by the attacker towards his old club. 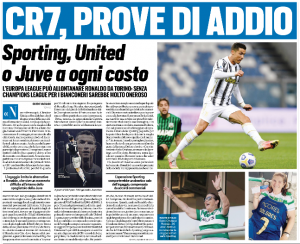 A return to Portugal, however, wouldn’t help Juve earn a transfer fee, but they can get Ronaldo off their wage bill.

Mendes is already working hard to find a new destination for Ronaldo, with United and Sporting presented as options for the summer.