What’s wrong with Paul Pogba? Well, he needs a specific set of circumstances to be expected to shine on a consistent basis and doesn’t use the quality he has to the best impact for Manchester United.

No, no, not that, what’s wrong with Pogba physically?

The midfielder’s injury has been shrouded in at least a little mystery, with differing claims over it being an ankle or foot issue.

L’Equipe have spoken to someone close to the player, and the French newspaper now have some detail on the situation, and it’s not great for Manchester United.

They report he has a small crack to a toe. L’Equipe say this sounds like a similar diagnosis to what kept Neymar out for so long, however, they say people close to Pogba deny it’s so bad.

Recovery time is put at seven days of immobilisation and then two to three weeks of recovery before he can consider a return, but they don’t make it clear when this timeframe starts from. 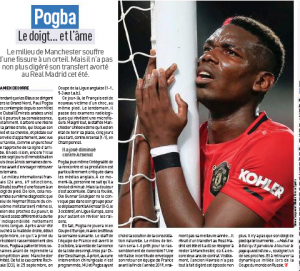 He took a knock against Rochdale and then had a scan which revealed a ‘microfisure’. It’s claimed Manchester United’s staff then thought the player would be fit for Arsenal.

That match made the pain worse.

Surgery isn’t being considered right now, with both club and player preferring to go down the ‘natural’ route.