There are few, if any, journalists better connected to those in power at Manchester City than Pol Ballus.

Working for Catalan newspaper Sport, he’s been based in Manchester for some time, covering what happens at City for the Barcelona leaning newspaper.

Given the club have had a real desire to get approval and recognition from Catalonia, they’ve given good access for some years to both Sport and Mundo Deportivo.

Under Manuel Pellegrini, it became a cause of friction, when journalists were invited to watch training at a time he didn’t approve.

In Thursday’s edition of Sport, Pol Ballus has managed an interview with Omar Berrada, who is described as the Chief Executive Operating Officer at Manchester City.

Inevitably, he had previously worked for Barcelona.

The article explains for a Catalan audience that English fans value winning the Premier League over Champions League, and Berrada is asked about City’s aspirations to finally get the big European trophy which Liverpool currently hold.

Quizzed on how important it is, he explained: “A lot, of course, but what we don’t want to do is obsess. It is something we believe will come. Of course it would give us one more point at the brand level, but it is a very random competition. Especially in the elimination phase. I would say that not always the best team wins the Champions League, but usually the best team wins the league.”

Of course, there may be something fair in that, but given Liverpool got to the 2018 final and then won in 2019, it’s not exactly been a random progression. Real Madrid’s previous dominance also shows that when clubs can make the competition click for them, they certainly do.

There may be an element of luck in a cup competition, yet there’d also be the same when over a season a club beats another by a single point. That’s not to say Manchester City had more luck than Liverpool last season, just that the presence of chance is clearly just as possible when things are so tight.

Berrada was also asked if getting Pep Guardiola was the final objective in the system built at the club, and he made it clear there’s more to come: “It’s not the last. Obviously we see it as a journey that we want to last for many years. And Pep is a fundamental piece. We believe that he is the biggest representative in the world of a game philosophy that 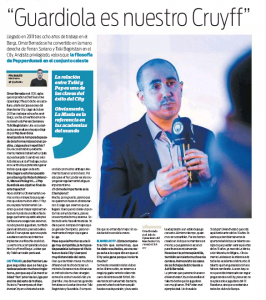 we wanted to adopt. He carries enormous demands, not only for the players, but also for the institution, but this elevates the club.

“He is a piece that helps us accelerate our growth and implement a philosophy in the club. We see it very comparable to what Cruyff did at Barça. The ideas that he and Txiki have brought will endure.”

Club ‘ready to welcome’ Manchester United player – Waiting for his...

Crystal Palace talks for €20m+ player ‘seem rather advanced’ – ‘Should...