Christian Eriksen is splashed all over the Spanish sport media on Thursday, making it look very like an agent or associate has been pushing stories.

The Tottenham player is said to be of interest to Real Madrid, and has no intention to extend his contract with Spurs.

Madrid aren’t the only club keen, and AS inevitably bring Manchester United into the equation.

It’s explained that due to Eriksen’s free agent status next summer, big clubs are circling.

Juventus and Bayern Munich also get a mention, with the Turin club the undisputed kings of the free transfer. In theory they could sell another player they signed for free, take that profit, and then replace him with the Danish international.

Manchester United are named as ‘interested’ and it’s stated the player’s agent has received ‘several calls’, with the insinuation being the three named clubs have been on 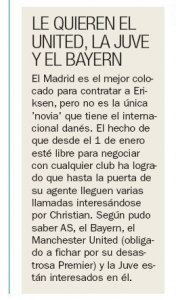 Elsewhere in their newspaper today, AS state Eriksen would prefer to wait until he’s a free agent than move in the January window.