Once again, it’s clear someone has been pushing Christian Eriksen stories to the media closest to Real Madrid.

Thursday sees both Marca and AS with the Tottenham player on their front cover.

AS believe he would ‘only cost €30m’ in the January window, given that his contract with Spurs expires at the end of the season. Madrid are said to want the signing in the winter market, but Eriksen himself would rather wait until he’s a free agent so he can maximise financially.

The Spanish newspaper have been informed Eriksen would rather wait until the summer so he can pick up a ‘succulent transfer bonus’, meaning he’d be looking for a big signing on fee rather than Tottenham picking up any amount.

AS explain that when the player last signed a contract extension he took a slightly lower wage on agreement that Spurs wouldn’t have the option to extend the deal by a further year, as they have with some players. 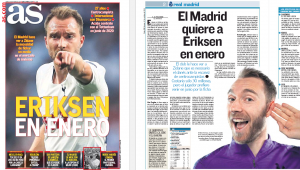 This gives him the negotiating position he has now, however, it’s hard to believe he’d reject a January move to Real Madrid on the hope they’d return for him in the summer.