Last summer, we relayed news from Spain that Bayern Munich ‘offered’ David Alaba to Manchester City and Barcelona as part of potential deals to sign Leroy Sané or Ousmane Dembélé.

Sport now claims the Catalan club are aware the Austria international wants to come to the Camp Nou, but he’s asking for a ‘very high’ salary. It’s difficult for Barca to sign Alaba because the competition ‘will be tough’.

Another report from the same newspaper explains ‘Manchester City are very interested’ in the versatile player, who can operate as a left-back and centre-back.

Sport once again mentions the English champions tried to sign him last summer, but Bayern refused to sell after the Etihad club vetoed Sané’s sale.

Despite the disappointment from 2019, Sport claims, City are now talking to Alaba. They can also afford to meet his salary demands.

The Bayern star’s environment is aware there’s a lot of interest in Alaba and they are negotiating with the highest bidder. 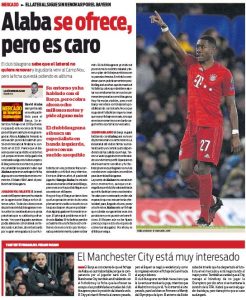 Manchester City are presented as offering huge wages, at a level which ‘escapes the possibilities’ of Barcelona.