David Alaba has been linked with a move away from Bayern Munich in the summer transfer window.

Bild in Germany claimed the Bundesliga winners have no plans to part ways with the versatile player.

Wednesday’s edition of Catalan newspaper Mundo Deportivo claims otherwise as the Bavarian club have ‘offered’ the 27-year-old to Manchester City and the Blaugrana.

The only information provided by Mundo is that Bayern have offered Alaba to the Premier League champions and Barca, but there is no suggestion if City are willing to sign him this summer. 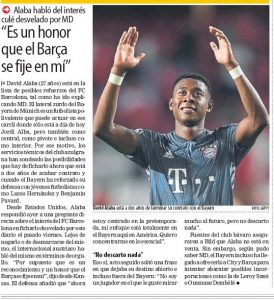 He joins Benjamin Mendy and Oleksandr Zinchenko as the three left-backs available at Pep Guardiola’s disposal for the next season.

Having already strengthened the position, it’s unlikely City would sign Alaba this summer.

The German stance on Alaba is very different, and it’s probably the right one… he’s not for sale.