The Turkish giants were linked with a move for Hernandez earlier in this transfer window but their interest in the Mexican had cooled in recent weeks.

According to the Turkish newspaper, Galatasaray want to bring in the player and talks between the two clubs are set to restart in the coming days.

Hernandez is also reportedly looking for ways to leave the Hammers and he may be tempted to continue his career at Galatasaray next season. The Super Lig club can offer the Mexico international Champions League football in the next campaign after again winning the league.

Star believe Hernandez will leave West Ham this summer after the Premier League side confirmed the arrival of Sebastien Haller from Frankfurt for a club record fee.

Gala are in the market for a striker with their current No.1 forward Mbaye Diagne close to leaving the club to join Al-Nassr. 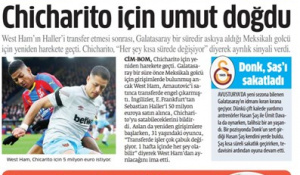 Hernandez has just 12 months left on his contract with West Ham.