Pierre-Emerick Aubameyang would very much like to join Real Madrid this summer. The Borussia Dortmund player has made no secret of his desire to play for the Spanish club.

Mundo Deportivo cover the situaiton on Easter Sunday, and explain that Dortmund feel Aubameyang would only be best served by a move to Real Madrid or Barcelona. With niether looking a likely option at the moment, that could give some relief to Dortmund.

However, Mundo Deportivo don’t think they should rest easy, because Manchester United and Manchester City could move in. It’s explained that Aubameyang could be an option for Jose Mourinho should Zlatan Ibrahimovic leave, and with the Gabon striker turning 28 years of age in June, he has the experience to please Manchester United’s boss. 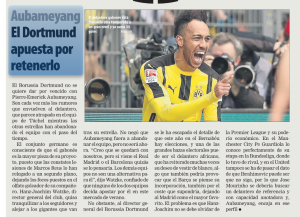 As for Pep Guardiola and Manchester City, the link seems to be solely based on the manager having worked in Germany recently, so he knows how good the forward is.

There doesn’t appear to be a great deal of options for Aubameyang right now, but that could change between now and when the window opens.