Home Europe Manchester City can buy back player at any time for €20m –...
SHARE

It seems the Pedro Porro saga is finally over.

According to Portuguese newspaper Record, Sporting triggered the buying option for the Manchester City player and his permanent transfer to Lisbon is confirmed.

The outlet claims Porro already signed his deal with the Lions, in a deal which will run until 2025, and is protected by a release clause worth €45m.

Sporting are spending €8.5m to sign him from Manchester City, as the amount had been agreed when the player was loaned back in 2020. Now the Lisbon side are set to announce the deal at the time that suits them best. 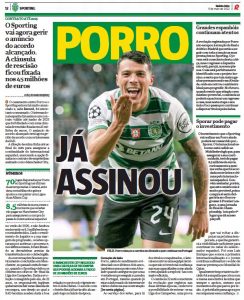 Record adds that Manchester City will have a buy-back clause which wasn’t even included in the original agreement.

That was negotiated in March, when the clubs faced each other in the Champions League, and due to the good relationship between them, Sporting agreed for Pep Guardiola’s side to include a clause that would allow them to have the player back for €20m.

That should be useful because, according to the newspaper, Porro is already drawing attention from La Liga sides such as Atletico Madrid and Real Madrid.

So even though the player is said to be focused on the Lions for now, it would be no surprise to see him soon moving for a lot more than €8.5m.