Emiliano Sala to Cardiff City has been a real transfer saga.

For some time the Welsh club have reportedly had a €20-22m agreement with Nantes for a January transfer, but Sala has been absolutely against it.

Then he travelled to Cardiff on Monday evening, after earlier talks in France with Neil Warnock, but things, for much of the French media, remained the same.

Sky Sports, not for the first time, reported on Wednesday that Sala had finally made his mind up, would join the Premier League club, and wouldn’t be playing for Nantes that evening.

The Ligue 1 side later had a snap back, by posting a social media video of the player’s shirt in their dressing room, but he only started on the bench and the potential transfer seems to remain alive despite claims of Cardiff reducing their offer. 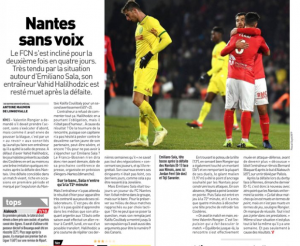 In their Thursday edition, L’Equipe say Nantes manager Vahid Halilhodzic has a serious ‘wrath’ towards his club’s owners over the transfer dealing, and it ‘isn’t feigned’.

They make clear it’s genuine because it’s thought that originally Halilhodzic overplayed his naivety at what was happening with Sala and Cardiff.